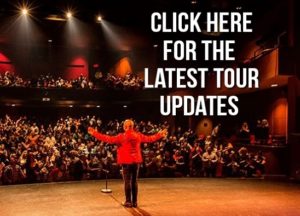 Looking for some good, old-fashioned belly laughs? You don’t get much better than corporate and family comedian extraordinaire, Joe Avati. A second generation Italian born and bred in Australia, Joe has become a firm fixture on the Australian comedy circuit alongside comic greats such as Carl Barron, Judy Lucy and Shane Bourne as the world’s only best-selling bilingual comedian. Joe has been called one of the planet’s hottest comics by the Globe and Mail and has received rave reviews from the Daily Telegraph and The Age, amongst others.

He frequently performs sold-out shows to massive crowds in Australia, the U.K, USA and Canada, where he still holds the record for fastest selling comedy show ever in Canada, selling 6400 tickets in 2 hours. 2016 sees the Joe Avati 20th Anniversary Tour visiting Adelaide, Sydney, Melbourne and Perth.

Fans of Joe Avati may know him from one of his wildly successful productions or comedy albums, including IL DAGO, IL DAGO II, Comicus Erectus, The Good, The Bad and The Ethnic, Livin La Dolce Vita and Live and Unpluggato. To date, Joe has produced 5 live albums and 5 live DVDs – each one better received than the last.

With a show that touches on universal themes such as generational differences, a love of food and the immigrant experience, Joe’s comedy is able to reach across languages, nationalities and ethnicities for a genuine laugh – and the fact that he avoids lazy profanities and offensive gags makes it comedy that is truly suitable for the entire family.

Unlike many other Aussie comedians who have also made it big, Joe remains firmly established in Australia, and makes himself available to perform at corporate events or weddings in the areas of Adelaide, Sydney, Melbourne and Perth.

When it comes to corporate or wedding event entertainment, you don’t get funnier than Joe Avati.

Over twenty years in the business has only made Joe Avati funnier – and he can’t wait to share some of that humour with you. As one of Australia’s most popular comedians, this actor, producer, motivational keynote speaker and MC is available to take your wedding or corporate event entertainment to a funnier and more memorable level.

Like many corporate comedians, Joe Avati took an indirect route to the top of the comedy food chain, spending time getting a degree in Food Science and inventing the Magnum ice cream along the way. All it took was 5 short minutes performing at an open mic night one fateful evening in 1995 for him to catch the comedy bug. A mere six months later he was booking paid gigs and the rest is history.

Joe Avati is a fluent speaker of Italian and prides himself on creating clean comedy that is suitable for all ages and audiences, making Joe the ideal choice for wedding or corporate event entertainment. His commitment to family friendly humour extends to his involvement as an ambassador for the Bully Zero Australia Foundation, which is the only Anti-Bullying charity in Australia with its own hotline and free support programs. Unlike many other comics that rely on crude and offensive jokes, Joe prefers to draw on his upbringing in a tight-knit, traditional Italian family. This creates a unique kind of comedy that every person in the audience can relate to, whether it’s a private or corporate event.

Unlike many other top comedians, Joe Avati has actively shunned superstardom and instead opts for keeping in touch with his audience on an intimate level, whether he’s met them at a wedding or corporate event. He regularly interacts with fans on social media, sharing everything from delicious Italian recipes to restaurant recommendations and travel tips. Joe is available for events such as birthday parties, corporate events, and weddings and he often tours internationally, including in Australia, Canada, England, Italy and the USA.

If you would like to book Joe Avati for your next event, all you need to do is fill in our form with your contact details and Joe’s management team will get back to you soon. Get ready to enjoy Joe’s unique brand of humour!

There is always that one neighbour with the lemons

Who knew this was our last dinner in a restaurant

Italian Alarms... Who remembers doing this?

Remember Encyclopedias...?? What did you have at h

This error message is only visible to WordPress admins


Error: API requests are being delayed. New posts will not be retrieved.

Error: API requests are being delayed for this account. New posts will not be retrieved.